This past week while trying to keep myself from dying of boredom I read a couple articles that really piqued my interest and got the old hamster wheel turning. They revolve around the topic of Eurocentrism. A subject that has been an interest for me since my undergrad, and the reason why I had contemplated working as a Curator at one point. I even wrote my senior thesis paper about Eurocentrism, and how it has impacted the museums of colonizing countries displaying objects taken from countries that were colonized. More specifically I wrote about how the British Museum was displaying objects from African tribes such as the Benin. My paper covered how the British Museum displayed these objects, how object and gallery labels white washed not only the history of the objects and cultures, but how the objects were obtained, how tribes were not consulted on how to display these objects, and that attempts for repatriation were slow or nonexistent. A colleague from an Emerging Museum Professionals group I am in shared a photograph of a recent exhibition label from the British Museum. Sadly, the photograph proved the museum has done little to change how it portrays African objects. Another component of this paper included a compare and contrast section where I discussed how museums in Nigeria displayed objects from the Benin culture, and showed the stark differences between the Nigerian and British Museum. If any of you are interested in reading this paper I can share it another time. I think I have only a paper copy of it these days.

So here I am sharing these articles and how they relate to the topic of Eurocentrism.

The first article is a satirical article from the Onion. If you aren’t familiar with the Onion, a majority of its news publications are satirical articles, tongue in cheek, and you have to take whatever “facts” they share with a grain of salt. In other words, it would be called fake news. The first article is called Shitty Museum Doesn’t Even Have A Mona Lisa, and the second article from the ARTery is called From Beyoncè To Bach: Culture Has Democratized And Museums Are Adapting written by Maria Garcia.

The Onion article is very brief, but it discusses a tourist’s comments after their visit to the Boston Museum of Fine Arts. The tourist asks how the MFA can even call themselves a museum when they do not offer any famous paintings like the Mona Lisa or Andy Warhol’s Campbell’s Soup. Are you shocked? Because I am not. The comments in this article are not entirely uncommon views that a museum is not interesting or worth visiting unless it displays artworks from the Old Masters. Think Da Vinci, Monet, Rembrandt, etc. These views of what is considered high art or art that is held with the highest regard are very Eurocentric views, and they have been around for far too long. These views are also why we are seeing instances like the firing of MOCA’s Chief Curator, Helen Molesworth. Here is a link to an article providing a little more detail on what happened. Details on Helen’s firing have been somewhat murky, but what is clear is that Helen is an advocate for diversifying art and museums. She is a symbol of the changes that must be made in both the art and museum world. These changes are happening, albeit slowly, but I firmly believe the next generations of museum professionals entering the field will be the catalysts the museum world needs to finally overhaul these pervasive Eurocentric views.

The second article, From Beyoncé To Bach: Culture has Democratized And Museums Are Adapting unintentionally (or intentionally, you tell me) also discusses the Boston Museum of Fine Arts and how the museum is putting on special events that provide relevant cultural experiences specially catered to more diverse audiences. These attempts are intended to draw in more visitors and remain competitive. Citing the latest findings from Culture Track, a survey of cultural audiences, the survey finds that Americans are no longer distinguishing between what was once considered high and low culture. Museums like MFA are jumping on these trends and organizing events that cater to more diverse crowds in an effort to increase membership numbers. These changes are exactly what the museum field needs to combat Eurocentric views and no longer be white spaces.

As a final thought, this subject also reminded me of a trip I took to Germany last year. I spent two weeks in Berlin for a seminar as part of my graduate program. It was an amazing experience, and one that I will never forget. On this trip we visited at least 30 museums. This is not an exaggeration. My feet were incredibly tired by the end. Anyways, The Bode Museum had put together an exhibition that really gave me hope for the future of museums. An example of a display from the exhibition can be seen below. The image below depicts two statues. One by Donatello and one created by the Benin. I apologize that I do not have a photograph of their front. I am not entirely sure where it is at the moment. Either way, the object labels are really the most important part and the most relevant to what I am discussing. Hopefully the crop of the labels makes them easier to read. Again I apologize if not. 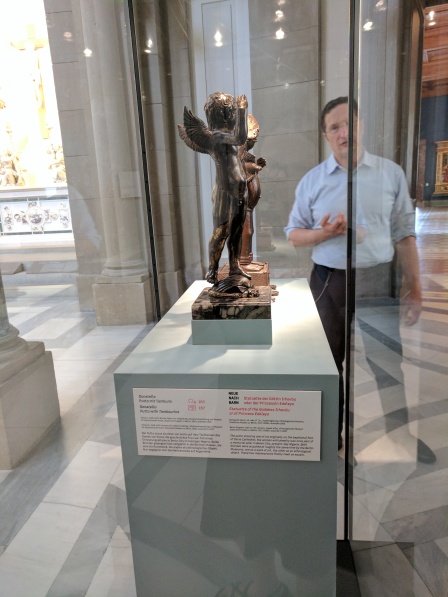 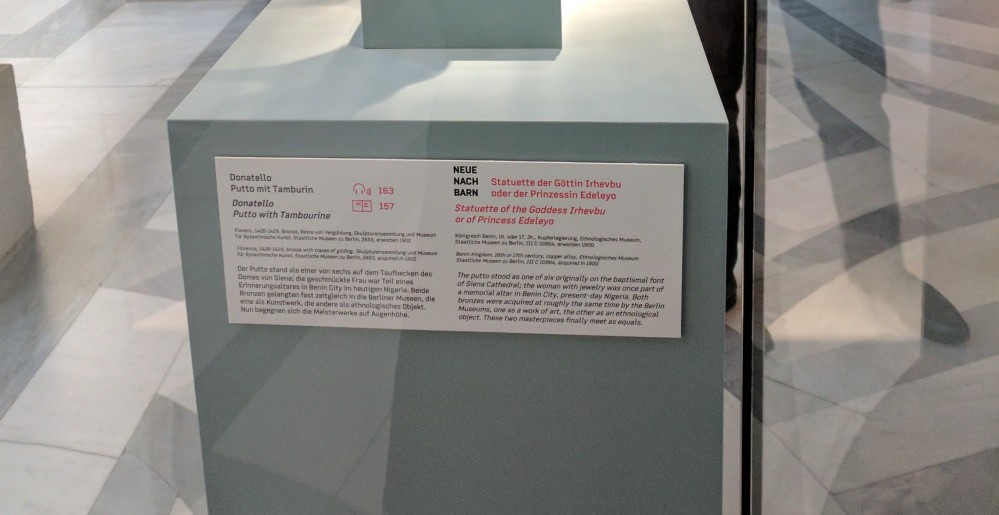 The Bode Museum had displayed these two objects in juxtaposition and labeled them both as master pieces. This elevated the Benin statuette from an ethnological object to an object of equal value. There were several more juxtapositions like this on display. It was beautiful and incredible to see and read how important these objects were to both cultures, and to see them displayed at the same level proclaiming we are the same, and we are equal. What another great example of the democratizing of culture, or in this case art.